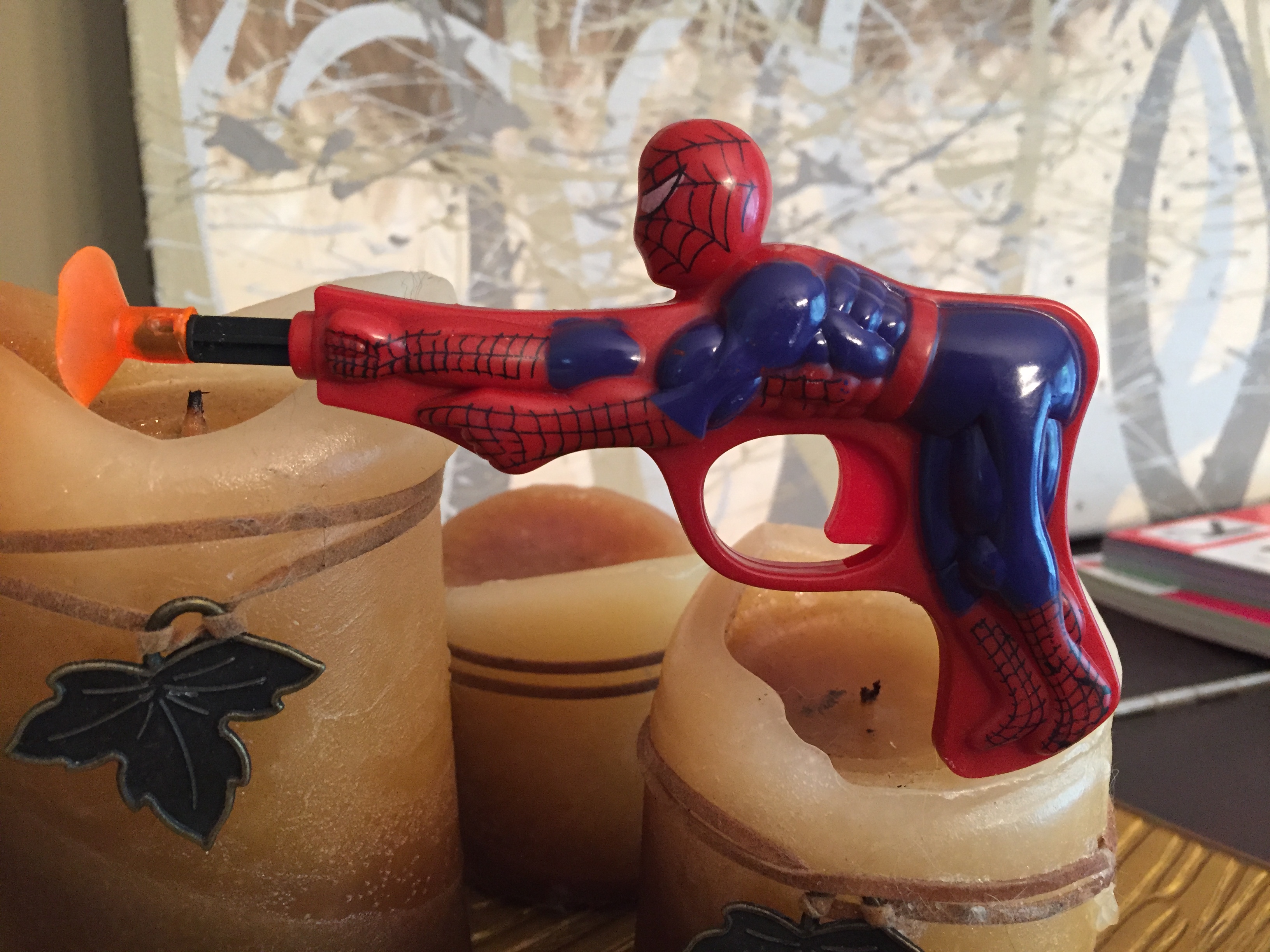 Spider-Man Dart Gun Toy with a Penis for aTrigger

In our last exciting episode of “Knock-Off Spider men, and the women who love them” Spidey explained, and demonstrated to us quite vividly, his challenges with Irritable Bowel Syndrome. We laughed, we cried and we pooped. Well Spidey is back in the Rubbish Reviews with this latest abomination, the “Fantastic Dart Set”. As advertised, it is indeed a dart gun set, but I am reserving my judgment on the ‘fantastic’ part until the end of the review. Oh, in case you haven’t noticed yet, his genitalia is used for the gun trigger. I’m not sure why the world hates Spider-man so much, but it is becoming painfully clear that they do…

Rub his trigger, that’s the plan.

This is shit you’ve got to see.

Look out! Here comes the Spider-man!

Is that a trigger in your pants or are you just happy to see me?

One of the holy grails of Knock-off toys is a Batman toy gun from the 60’s that made his appearance on the Internet a few years ago. Everyone laughed at the fact that his… um, Bat-o-rang, was the trigger for the gun, and the image went viral, at least in the communities interested in such horrid things. This toy has become quite an expensive little collector item so you can see why I am excited today to showcase a similarly themed Spider-man gun that only cost me $1.99

He’s the squirt gun kids deserve, but not the one they need

The Spider-man Fantastic Dart Set includes our hero in a gun form, who apparently has a broken zipper in his costume, as little is left to the imagination. Also included are 3 plastic, rubber tipped suction darts, an image of a bulls-eye painted into the perforated packaging that when punched out and connected to the base becomes the target. You would have thought that they would have at least painted a decent picture of Doc-Oc on the target, but that may have forced them to raise the price of the toy to about two and a quarter and they knew nobody would pay that much for this thing. 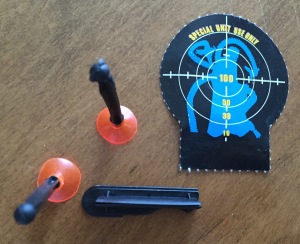 All this phallic imagery could be yours, if the price is right!

The plastic on the darts is cheap, quelle surprise. It is comparable to a 3rd rate dollar store ‘army man toy’; you know the type, the rubbery plastic that is somehow both mushy and fragile at the same time. How do they do that? Is there something in the manufacturing process? Is it the training of the workers or the age of the moulding machines? Maybe it’s the fact it is built from space goo that landed on Earth in the Mesozoic era and only now starting to solidify and stabilize under our yellow sun’s rays. Whatever the case, the damn thing seems radioactive enough to charge a battery and I do not recommend anyone touch it with his or her bare hands.

The un-boxing went as well as you would imagine, I opened the package and immediately the plastic piece that holds up the target crumbled to pieces over my keyboard. I didn’t even touch it, the damn thing collapsed under the pressure of the air in my office. Good! One less horrid thing to review I suppose. On a more positive note, the darts are loaded into the gun with little resistance or bother and the suction component works pretty well. I took some time off work and had some fun around the house placing him on surfaces to give the illusion he was swinging with his web. What can I say, enough years of inhaling these toxic toys has left me with a rather vivid imagination and the attention span of a gnat.

Don’t worry Spidey; I put enough spit on that dart to keep you hanging for days!

The toy design is a little… off. Sure there is the obvious fact that his Johnson is a trigger for a gun, but his weirdness goes beyond that; If you look at him carefully enough, you can see he has 2 arms and 2 legs on either side of the gun. If you ignore the 3rd dimension, this may make sense, however be it that there are at least 3 dimensions to work with in our plane of existence, Spidey ends up with a total of 4 legs and 4 arms. Maybe this was on purpose, I mean a real spider has 8 appendages, maybe that is what the good designers at ‘too embarrassed to put our name on the packaging Inc.’ intended. Na, that seems a little too clever, that can’t be it. 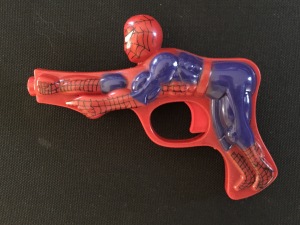 Luckily Spider-man comes with only 1 head, assuming you ignore the one on the trigger. Although only a single eye was painted on either side of his head, and in true knock-off form, one of them was painted; shall we say ‘cock-eyed’? The fact he has the single head, further suggests that Spider-man was only supposed to have a single arm and leg on either side of his body, you know… like a human. For future reference, I recommend the workers that built this toy be allowed to leave their cage every now and then to see what other humans look like. It may help with the realism of their next toy.

Although they totally nailed the detail on his ass.

Remember when toys were spring loaded with so much pressure that children would lose an eye? Pepperidge Farm remembers. So does my buddy Jack who now has no choice but to get a job as a ‘pirate waiter’ at seafood theme restaurant after this toy went off in his face. The pressure and firing power in this toy is definitely beyond any safety limits that are set by nations that care about children. I am appalled at Spidey’s lack of consideration for our children. Maybe he is angry at the world that forsake him and sentenced him to live as this atrocious abomination and is now Hell-bent on exacting his revenge on our children! Wait, that’s the story of Nightmare on Elm Street… At any rate, not cool Spidey. Not cool. 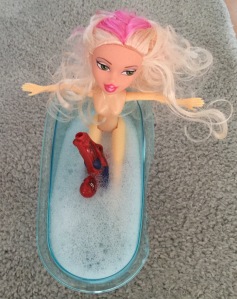 Spidey is held together with 3 screws, 1 in his knee, 1 in his hand and 1 in his head. In a cruel, albeit apt, irony, the screw his head is loose. If the deformations to his arms and crotch weren’t bad enough, his legs are short and stubby and he appears to be wearing, what reminds me of, a Christmas sock. It doesn’t remind me of a particularly great Christmas either, more like the Christmas where my dad had to put my dog down. Fa-la-la-la-la, la-la, la-la. Speaking of Christmas, it looks like Spidey put on a little winter holiday weight as well, or did he always have cankles? Granted, at this juncture, pointing out any additional flaws is a lot like picking on a 3-legged blind dog with a learning disability, or like picking on Donald Trump.

He looks familiar to me … Give him a ‘Molson Ex’ baseball cap and he would be a dead ringer for this homeless guy that used to pee in the alley behind my old apartment, although hobo-Joe had the decency to put his schlong back in his pants when he was done.

… and they both seem to have a similar obsession.

Hey kids! Who wants to play with Spider-man’s long, hard trigger and shoot someone in the face with what comes out? Our red-headed warrior provides hours of entertainment all in the palm of your hand! With the Spider-man dart set, you can improve your aim, stamina and impress your friends with how much control you have! I can’t tell you how much fun I had playing with my little Peter until nearly going blind when it went off accidentally due to the pressure. Use both hands for that extra secure grip!

And in a final insulting note to our hero, the package clearly states that it has small parts and may pose a choking hazard.

Sometimes this job is too easy…

All you need is 1 free hand.

But if you play, every day,

Those hairy palms won’t go away.

Look out! Here comes the Spider-man!

What do you think? Is this merely a great toy or is it the greatest toy ever made? Those are your options. Leave a comment and let the nerd army know! Don’t forget to like, share and subscribe and let the word of the nerd be heard!

Help Spread the Word of the Knock-Off Nerd:

Leave a Reply to The Sewer Den Cancel reply